What is Haiku and Does it Matter?

Across many haiku communities people argue about what haiku is. Some people write mostly haiku and attest that you need kigo (season words) or kireji (cutting words). Others believe that you must adhere to “5-7-5″—though most communities have abandoned this syllable count.

And then there is senryu. As I understand, senryu is like haiku, except for the way that haiku deals with seasons and nature. Senryu deals with more hum drum subjects. And by hum drum I mean human and humorous, although haiku involves humor too, senryu is a lewder humor.

I have read that senryu began as mocking poems so in a way senryu is an anti-poem. Haiku are also anti-poems. Haiku capture a singular haiku moment—they don’t tell a story like much of western poetry.

I think the moment part of the haiku and senryu is the defining factor. In a way, arguing over what haiku is or isn’t can make us forget that moment.

I do believe that there are some rules that define haiku, I do not think they are so easy to bog down. It’s about seeing a moment and capturing it, all image, all meaning. If there is more to it than just a frog jumping in a pond, then that’s so it goes.

Or maybe all the meaning, of haiku and life, is just the reader’s inference. 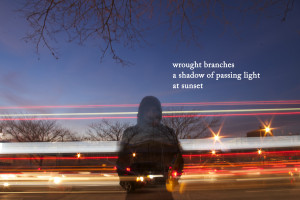